This video is about the last day of my Russian trip-2017. Time to say Dasvidanidya Russia.
On the early morning of 1st October, I reached Omsk from Novosibirsk. The 8-hour long journey was very comfortable. Watch this video to know the cost of the train ticket and how did I get the ticket at Novosibirsk train station.

This was the second time I was at the Omsk station. Watch this video to see my first ever experience at Omsk train station. After arriving from Novosibirsk in the early morning, I used the free toilet facility to freshen up. Then I relaxed for few hours in the waiting hall. Waiting halls are called Sitting area in Russian train stations. Sitting area is elegant and clean. The entire station’s architecture is beautiful. I clicked some pictures of the beautiful interiors and also enjoyed the free WiFi at Omsk train station.

Omsk does not have a big airport. My flight was scheduled around 4:30 pm and I had around 3-4 hours to gather significant information about the airport. WiFi is available for free at the airport, but you have to log-in after every half an hour to use the service. Drinking water is also available for free. No English – The crucial information on signboards and indicators are not displayed in English. It was a challenge to find someone from the airport staff who could speak English.
Immigration and Security check was smooth for me.

After a 50 minutes flight from Omsk, I reached Astana, the capital city of Kazakhstan. Thanks to Air Astana, the flying experience was quite good. But I must admit that the ground staff of Air Astana has to improve a lot. In Astana, I had to struggle a lot to find someone from the airlines. They do not have any office in the terminal building where I landed. I was given wrong information by the ground staff that in the next flight to Delhi I will not be served vegetarian meals. I was hungry at that time and angry at the carrier.

Finally, I arrived at Delhi at midnight. Flying from Astana to Delhi with Air Astana was a good experience. The crew members were very courteous and professional. ‘Rakhmit’ (thanks in the Kazakh language) to Air Astana Cabin crew. 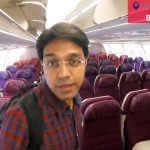 High Altitude Sickness in Himalayas : How to avoid ? Watch this before visiting Aizawl, Mizoram

CouchSurfing in Almaty: The Modern Kazakhstan!