I travelled to Canada in Winter of 2018. While travelling to Ottawa from Toronto I took a train, officially called VIA Rail in Canada. So this video is based on my journey from Toronto to Ottawa on a VIA Rail train.

It takes around 4.5 hours between Toronto and Ottawa on a Via rail train. The lowest train fare from Toronto to Ottawa is 49 CAD (around 2,500 INR) in economy class. However, the fares are dynamic and keep changing as the seats get booked. VIA rail fare from Toronto to Ottawa

How to board a Train in Canada!

You must have a boarding pass to enter the platform level in Canada. The boarding pass can be in a digital form and not necessarily to be printed. The official scans the QR code to read the ticket’s details. I wish we could have such a system in India which will help our station premises crowd free by only allowing the authorised passengers on the platform. This system also helps to know the reservation system whether the passenger has shown up or not! In case of a no-show, the vacant seat can be sold to other passengers.

What else in this video!

In this video, I have shared information about onboard facilities on a train. The video shows the Union Station, Toronto from inside.  Also includes GO transit train which operates in and around Toronto.

My first train journey in Canada : Toronto to Ottawa in VIA Rail was last modified: May 11th, 2019 by VV
Budget travelcanadaottawaPublic transporttorontoTrain
1
Facebook Twitter Google + Pinterest 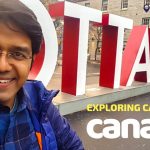 How to plan a budget Europe trip from India