Watch to see my experience of travelling with Air Canada from Frankfurt to Toronto . Flight duration from Frankfurt to Toronto is 8 hours. I have shared information on how is the inflight entertainment in Frankfurt-Toronto flight, Vegetarian Food in Air Canada flight, etc. After landing at Toronto Pearson Airport (YYZ), I have shown how is the arrival terminal, how was my experience with the Immigration in Canada; fastest and cheapest options to travel from Toronto Pearson airport to Toronto Downtown. You will get to know about the airport train UP express from the airport to Union station, bus 900 from Pearson airport, etc. I took a bus from Toronto airport to Niagara.

My flight from Delhi to Frankfurt 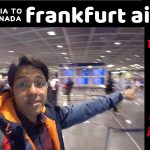