This video tells how to travel between Terminal-1 (T-1C & T-1D) and Terminal-3 of Delhi Airport & vice-versa. Also, tells how to reach the nearest Metro station from both the terminals. Watch this video if you are looking for how to go to T3 from terminal 1D.  I have also shown how to travel by a city bus from T1-D to T-3 of New Delhi Airport. Actually, it is the cheapest and fastest medium to do the airport terminal transfers in Delhi

Difference between T1 and T3 of Delhi airport

Delhi Airport has 2 active terminals. Terminal 1, is used by low-cost carriers such as GoAir, IndiGo and SpiceJet. Terminal 1-C is used for domestic arrivals, and Terminal 1-D is used for departures. Terminal 3 is used for all International flights and few full fare airlines having domestic flights in India.

How to reach T3 from T1D

The distance between T3 and T1D is approximately 8 kilometres. Presently, there is no Metro Train connectivity between them.  The following are the only options to connect T3 with T1 and vice-versa.

Free shuttle bus runs after every 20 minutes. This is the official bus service by DIAL (Delhi International airport limited), who is the operator company of Delhi Airport. Only those having a connecting flight from either of the terminals are entitled to avail the free service. Passengers are supposed to present their boarding pass to get their complimentary coupon before boarding the bus. Free Shuttle bus kiosk is also located near the Pillar number 10 of the Arrivals (Ground Floor) of T-3. Watch this video for more information.

For more information on this service, passengers can approach the Duty Manager inside the airport or Airport Enquiry kiosks.

Delhi Government’s official bus service – DTC (Delhi Transport Corporation) also operates its Inter-terminal shuttle bus between T3 and T1 (1C/1D) round the clock. This service is generally available after every 15-20 minutes. Passengers are charged Rs 25 for a one-way journey. It takes around 20 minutes to reach its destination. On the way, the bus halts for few seconds at AeroCity Metro station to drop and pick-up the passengers. This way the service can also be utilised for travelling between AeroCity Metro station and Terminal-1. No boarding pass is needed to travel in this bus.

Besides Delhi Police Prepaid taxi service, there are few application based cab services like Uber and Ola.

I always prefer travelling by the city bus while travelling between T3 & T1D. This is the cheapest way to travel between both the terminals. After this, I would prefer to take an Uber or Ola cab, which are mobile application based cab service. They are convenient to approach and user-friendly unless you do not know to operate smartphone-based apps. They also occasionally come out with offers and deals, which can really help you to save money on travelling.

For people knowing Hindi, Subscribe to the channel here, where you’ll get most of the travel related information in Hindi. 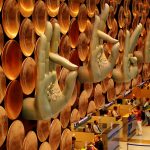 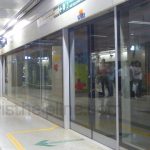