This report is for my friends who were keen to know about – How I travelled Europe in just Rupees 10,000, that too for 16 days! Of course this does not include air tickets. I am mentioning about the expenses incurred only on food, stay and travelling in Europe (continue reading to know the ticket cost). So, dear friends, firstly let me tell you that elements like comfort, luxury and pre-planning are inversely related to a budget trip. For cheap travel, you must be ready to sleep anywhere you find the shelter, use public transport, eat whatever you have in your bag and that too while having a lot of fun. While doing all this, I was lucky enough to meet wonderful people and spend quality time with them. (also read : How to stay for free in India)

This was my first trip to Europe. The foremost thing to travel Europe cheap I did was choosing cheapest places to travel. After extensive research, I found Eastern and parts of Central Europe are moderately cheaper for travelling than the Western European countries. Though this is not a rule of thumb. The season is also a big factor. After searching for the best season to travel Europe, I zeroed down to The Czech Republic, Poland, Hungary, Slovakia & Austria. In fact, they are cheapest countries in Europe to visit. The best thing is – all these countries are the member of Schengen area. It means you do not have to spend your time and money to get a separate visa for each country. Just a single Schengen visa serves the purpose. As of October 2016, Schengen visa cost INR 4,500 in India.

The best thing is – all these countries are the member of Schengen area. It means you do not have to spend your time and money to get a separate visa for each country. Just a single Schengen visa serves the purpose. As of October 2016, Schengen visa cost INR 4,500 in India.

How to get a cheap flight ticket to Europe

Air tickets consisted the 70% of my total expenditure on this trip. For continuously 2 months I kept checking cheapest way to get to Europe. I searched the airfare almost every hour combining different cities, flights, and tricks. This gave me a fair idea of the cheapest airfare from India to any European city. I finally purchased a ticket which had this itinerary – New Delhi-Dubai-Prague & Prague-Kiev-Dubai-New Delhi for almost Rs. 34,000.

Though this itinerary had layovers as long as 6 hours at Kiev and Dubai, but this also gave me an opportunity to explore these airports and chat with airport staff and other passengers. (Read –  What did I do during the long layovers at Dubai and Kiev airports)

Airlines I used during this trip – Air India Express, Smartwings & Ukraine international airlines (also read – Websites that helped me in getting cheap flight tickets to Europe).

How did I travel in Europe

Rest of the travelling was either done by public transport or by Hitch-hiking :). Yes, you got it right. I took free lifts from the passing vehicles to travel from one place to other, even from one country to another. I should say that this is the brightest part of travelling Europe. Many European countries are now a part of the European Union. The borders are almost non-existing. I could visit Slovakia and Austria from the Czech Republic as if I go from Delhi to Gurgaon. I met few travellers who had travelled through Europe by hitch-hiking.

Hitchhiking is quite common in Europe. I met a lot of wonderful people while travelling this way. Though sometimes language was a problem in Czech and Austria, but as it is said ‘Language is not the barrier, the heart is‘. It always took some time to explain ‘who I am’ and ‘where do I need to go’, but thereafter our conversations used to become very friendly. One of such person was Stephen who was travelling to his hometown in Veselí nad Moravou, but he took a detour to drop me at Strážnice, the place where I wanted to go. I got to travel in a truck and also an ultra-advanced model of Mercedes car with a Czech-Russian gentleman.

Though it is not always easy to hitchhike. I was dropped by a person near a railway station but the train had already left. Then I had to walk for about 4 kilometres to reach near a gas station (Petrol Pump) on the highway. Even there I had to wait for more than an hour struggling in the chilly winds to get a free lift. Due to the language differences, Once an old man misunderstood my destination and dropped me to a completely different location. But I believe that such uncertainties are the beauty of travelling this way.

Public Transport is cheap in Europe

In cities like Prague, Brno and Vienna I always took the public transport. It is one of the best ways to travel on a budget in these cities. Public transports consist of modern buses, trams and underground metro/subway in big cities. The best part of travelling through them is that you do not have to take a ticket for each and every ride. In Prague, I spent 110 Czech Crown (300 INR) to get a 24 hours ticket which is valid on all buses, metro and trams in the city. In Brno, the fare for the same duration is 90 Czech Crown (245 INR). Although travelling in the capital of Austria, Vienna is comparatively costlier. I had to spend 7.60 Euros (560 INR) to get a 24 hours ticket. (Read – Useful travel apps in Europe).

Where did I stay in Europe Bunk beds in a Hostel

Whenever I do budget travelling, I prefer to stay in hostels. They are cheaper than hotels and also offer an opportunity to meet other backpackers from around the world. My first destination was Prague where I stayed in Hostel Ananas. Booked this hostel before leaving India (from the ‘Book now, pay later‘ box placed below this article). This tool helps to book any accommodation around the world without making payment in advance.

Besides this, I slept on airports, travelled on night buses and purposely took overnight flights. I did CouchSurfing to stay with the locals in the countryside. This helped me to learn about their way of living, culture and habits more closely. I stayed with a person in his beautiful cottage on a hill. We met while travelling in a local bus and became friends in a short time. One of my hosts took me to Slovakia in her car and showed me nearby villages and the countryside. Another family with whom I stayed in Břeclav offered their heart touching hospitality. I stayed with them for two days. In another example, the host handed over the entire house to me and left for some work for two days. I believe, experiences through travelling this way can revitalise our senses and fundamentally transform us for the better. (also read : How to stay for free in India)

What did I eat in Europe Being a vegetarian, it was a problem for me to find vegetarian food in the Czech Republic and Austria, especially when people do not understand English. The vegetarian restaurants were quite costly. Then supermarkets like Billa, Albert, Müller, etc. came to my rescue. I purchased things like Bread, Milk, Cheese, Butter, Nutella, Chocolates, Yoghurt, Carrots from there and this is what I had most of the time on my trip. To add variety, I tried different types of bread, cheese and butter. It’s very cheap to buy raw food from supermarkets and then prepare whatever you like in your hostel or at your host’s place. Most of the hostels offer a kitchenette with microwave oven, kettle, hot water, plates and cutleries for free of charge.  Do not forget to clean it after use for the convenience of other guests.

Mineral water is costlier than a Beer!

I never bought water during the entire trip. Tap water is drinkable in all the places I visited. So keep a spare bottle with you while travelling The Czech Republic and Austria. You can save plenty of Euros this way because a bottle of 500 ml of water may cost around 1.5 Euros (110 INR) in some places.

Where to pee in Czech Republic and Austria 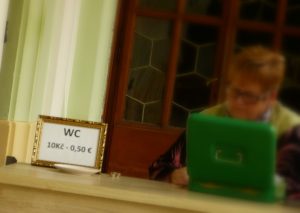 Pee is not free

If you are travelling on a budget, then trust me, answering the call of nature can spoil your trip in these countries.  The more you answer, the more you lose the precious Euros :D. See this picture. You may have to spend 50 euro cents (40 INR) to use a toilet at tourist spots. But I never paid to pee. I used public toilets in metro stations or bus terminals in big cities like Prague, Vienna and Brno. Though, toilets in Vienna metro stations were quite filthy. Or you can also search the nearest shopping mall with the help of smartphone applications. Their toilets are comparatively cleaner and free to use.

So this is how I travelled my first Europe trip in just Rupees 10,000. Besides Czechs, Slovaks and Austrians I met travellers from Brazil, Mexico, Tanzania, Nigeria, Ukraine, Russia, Italy, France, Germany, Philippines, Korea & China. I talked in Hindi with people from Pakistan, Afghanistan & Bangladesh and together we felt like lost brothers who just found each other (Watch this video). I also met Roma and Gypsies whom I consider are the true wanderers of the world and think myself as one of them.

Watch : My Backpacking trip to Bangladesh

Read : How to stay for free in India 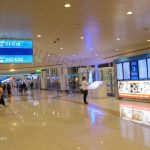 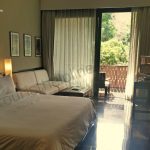 Hitchhiking in Russia (Day 8) To Gorno-Altaysk Travel across Europe with One Schengen Visa 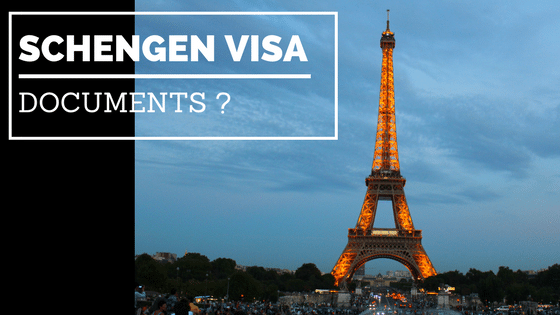