I am back after a low budget backpacking trip from Europe. I could manage all my traveling, food and accommodation expenses in less than 10,000 Rupees (140 Euro) for 16 days (How! Read here). But could not manage to get a dirt-cheap deal for air tickets. So I had two options. Either pay more to full fare airlines and reach the destination in less time or break the journey in parts & travel by low-cost carriers to save some money. I opted the second option and got tickets in Rs. 34,000 with this itinerary – New Delhi-Dubai-Prague & Prague-Kiev-Dubai-New Delhi. Though I got the tickets quite cheap but it had long layovers. Some of them were as long as 6 hours. So, how I spent long layovers at airports in Dubai and Kiev (Ukraine) ? Continue reading.

My Air India Express flight from Delhi to Dubai landed at the terminal 2. This is a small terminal meant only for ‘Fly Dubai’ and other low-cost carriers. My connecting flight operated by Smartwings was scheduled after a gap of 3.5 hours. Getting the new boarding pass, Internal transfer from arrival to departure and security check took almost One hour. Rest of the time I spent using the free wifi and searching the mobile charging points. This terminal has just 3 mobile charging stations in the departure waiting lounge, which is very less for the huge number of passengers it handles. Also, the wifi is free only for first 1 hour, thereafter you are required to pay. But thanks to the limitation due to which I had to keep my mobile back in the pocket and I could meet some friendly airport staff from Philippines, Pakistan and India. While returning to India, the Ukraine International Airlines from Kiev landed at Terminal 1 of Dubai International airport. This terminal is used for all international airlines (except Emirates). It is huge and exploring it is a must-do activity.  It is one of the busiest airports in the world but has only 2 active runways. So watching flights of all kinds landing and taking off every now and then is a fun. It offers all possible luxury facilities to the passengers. So you can either shop at the duty-free shops or use free wifi for unlimited time. Or just roam around and explore the airport like I did.

My next flight was from Terminal-2. Dubai International airport provides free transfers between terminals. I used the free bus facility. The bus driver played some new Hindi tracks when he came to know that I am an Indian. I was impressed by his gesture. While getting down from the bus I went to thank him. He spoke in fluent Hindi and introduced himself as a Pakistani from Balochistan. We exchanged smiles and said Khuda hafiz to each other.

Kiev is the capital city of Ukraine and its International Airport is located in Boryspil which is outside the city of Kiev. I landed at the Boryspil International Airport from Prague and had a connecting flight to Dubai. Both the flights were operated by Ukraine International Airlines. At first sight, the airport looks like another newly built airport with modern architecture. But it fails to provide even the basic facilities to the passengers. There is no free drinking water. Phone charging points are almost negligible. There are no trolleys in the waiting area, so it becomes hard to go here and there with all the bags. I won’t recommend including this airport in your itinerary. 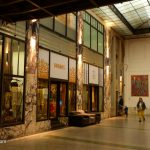